When it comes to producing great video testimonials, quality means everything. While you might not have complete control over every aspect of the production, there are many things that you do have control over and others you can significantly influence. This holds especially true when it comes to capturing testimonial content because you'll most likely be filming non-professionals in an office and not in a video production studio.

In this post, we'll discuss some preparation best practices that we highly recommend you take into consideration before your start filming. For many companies, video is often considered a significant marketing investment, and following these basic guidelines will help contribute to the overall success of your shoot, helping ensure you capture the best customer testimonial videos possible.

Frequently, marketers are so absorbed in the brands and products they manage they will overlook the fact that even though their solution or product might be game-changing in many ways, to most end-users, it's just a tool. A tool that may genuinely provide great value, but chances are they're not going to be able to summarize and package that value in a quick and concise response the way you think they might. 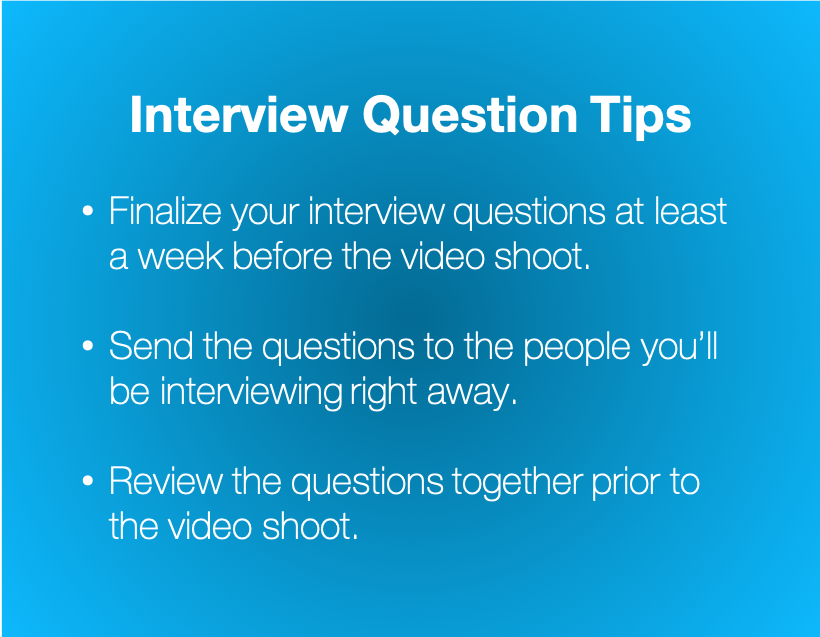 A good full-service video production company in Denver will help guide you through the interview process to get the responses you want from your on-screen talent eventually. Still, the key to getting the best possible responses is to prepare your talent by providing them with the questions before the shoot. This may sound like a no-brainer, but it's overlooked more than one might think.

In fact, many times, people will just email the questions a day or two in advance, and often times those emails don't even get read. You'd be surprised at how often people show up for an interview without having seen the questions. If you want to deliver a truly exceptional testimonial video, you have to put in the effort to make sure the people you're filming are prepared for the video production process.

To achieve this, it's imperative that you not wait until the last minute to finalize your questions and then email them to your subjects the day before. We suggest you provide the questions to the people you'll be interviewing at least a week in advance.

In addition, we also highly recommend you schedule a time to connect with each person a few days before the shoot to run through the questions you'll be asking them. This will make both the people you'll be filming more comfortable with their responses come the shoot day and will provide you with the opportunity to coach them on their responses before they get in front of the camera.

Naturally, people will warm up and begin delivering more fluid responses once they've been in front of the camera for a few takes. For this reason, we also recommend that you structure the order of your questions so that the more critical questions are towards the middle.

Why the middle? Because if you have a lot of questions and move them to the end you may run the risk of your subject experiencing interview fatigue when answering them, which can easily be picked up by the camera.

Keep in mind we're talking about filming a Denver corporate video production testimonial about someone using a commercial product or service, not a documentary about an emotionally driven topic. 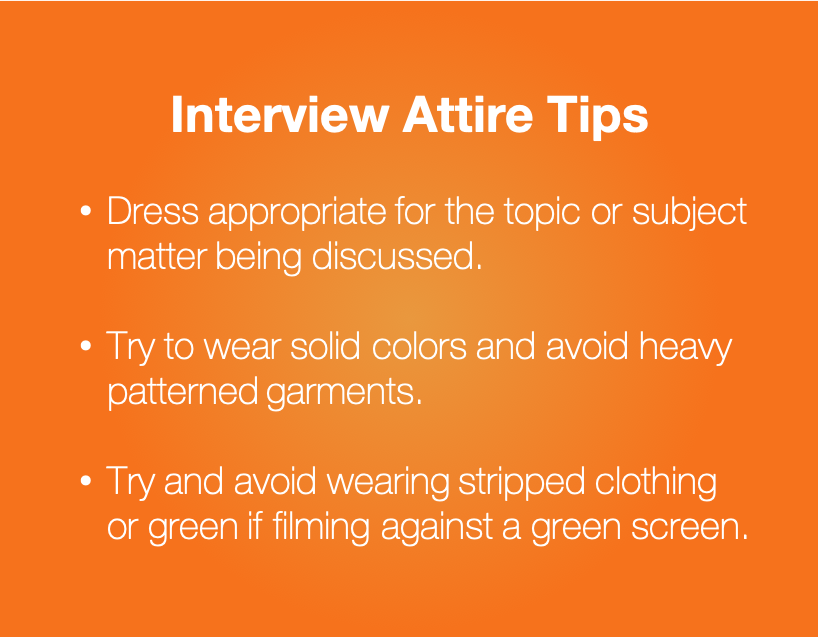 To enhance the humanizing touch that video delivers, we always recommend that people wear what they usually wear to keep it genuine. But because they'll be on camera, we also suggest that people try and wear solid colors, or at least not heavily patterned garments, and specifically avoid wearing striped shirts or sweaters. Slight movements in striped clothing can result in the video footage creating a flickering effect due to the camera's shutter.

And if you're filming against a green screen, definitely don't wear anything green. Even if you're wearing a white shirt with small green buttons, you're going to want to find a different shirt to wear. Anything green will appear missing when it comes time to edit the footage.

If you're filming both talking heads and b-roll of the same people on the same day, we suggest you ask your subjects to bring multiple sets of clothing to the video shoot. This way, you can film their interviews in one set of clothes and their b-roll in another, making it much more dynamic.

Lastly, if you're filming someone that wears glasses and they have the option of wearing contact lenses then we always recommend that you suggest they bring them just in case there are any issues with the lighting. On occasion, lighting reflections in the subject's glasses can occur depending on the lighting environment.

In most cases, lights can be repositioned to omit or at least minimize the glare. Still, just to be safe, you'll want to ask them to bring them if they have them, especially if you're filming a scripted response testimonial being read from a teleprompter.

It's essential that you don't underestimate the time it takes to capture good testimonial content and that you also set the camera time expectations for the people you'll be filming. The last thing you want to experience is telling someone the interview will take 15 minutes and having it take 45 minutes instead. 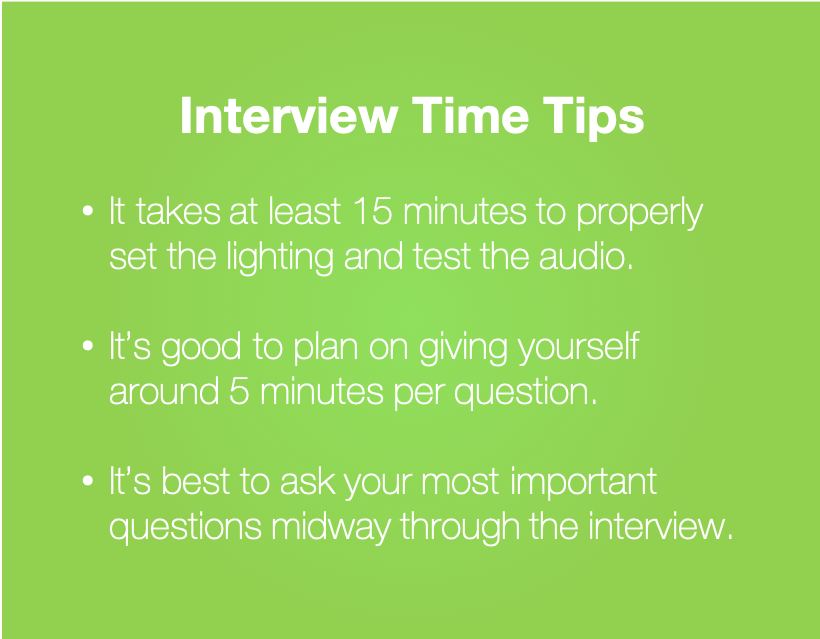 Very rarely will you ever have a one-and-done testimonial. Sure, you may only have five questions to ask but depending on how good of a response you're getting or how comfortable the person looks on camera, you may end up taking five takes of each of those questions. And that's just responses. It's not uncommon that you'll experience a perfect take only to be ruined by an unexpected sound or the subject not taking a beat when finished and then looking directly at the camera.

In addition to the time it takes to capture the footage, you also need to take into consideration the time it's going to take to set the lighting so your subject is perfectly lit, the framing of the cameras, so the subject is captured just right during the video production in Denver. The positioning and testing of the microphones to make sure everything sounds flawless. Perfecting these tasks can take upwards of 15 minutes or longer if you're filming in a challenging environment.

The point we're trying to make is that you need to be realistic with your subject on how long things will probably take. Setting camera time expectations can also help mitigate interview fatigue if everyone is on the same page from the beginning.

As a rule of thumb, we like to tell people that at a bare minimum, it takes at least 15 minutes to perfect the lighting, mics, and cameras, five with the subject actually positioned in the frame, and then about 5 minutes per interview question. So, if you have 5 questions, you should figure it's going to take about 40 minutes of the person you'll be filming's time.

If you're filming at a customer or small business location, you'll want to make sure that they notify their employees, even if they're not in the video, before they show up to a Denver video production shoot going on at the office. You'll, of course, want to do the same at your office if you're filming an employee testimonial or any video for that matter. 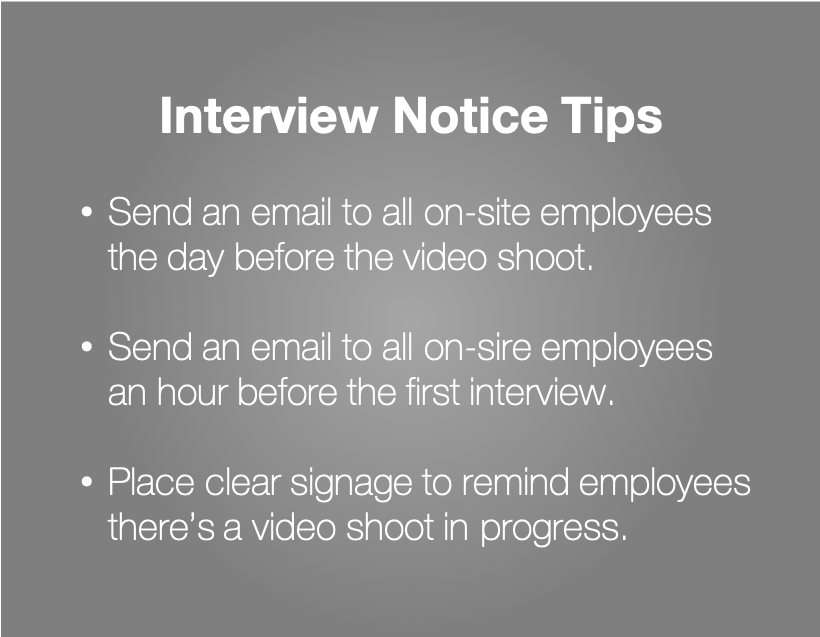 Notifying employees will help ensure that the office is clean and tidy if the b-roll is being captured and gives them a heads-up so they too can dress appropriately, even if they're only seen in the background. It also helps remind people to be extra quiet that day.

And just in case the video production company you hire doesn't provide signage on the day of the shoot, it's always a good idea to post signs that remind people that there's a video shoot in progress and to send a company email about an hour before filming time. Doing this will remind people to be respectful of their sound levels and help minimize potential background noises, while you work on enhancing your digital marketing campaign with the Denver video production company from start to finish.

5. Prep and Stage the Filming Area Before Your Talent Arrives

If you're hiring a professional production company, you probably won't have to worry much about prepping the filming area other than providing general direction to the producer and director. However, since you'll be the ultimate owner of your video content, you'll want to make sure to double-check everything visually before the cameras start rolling. Ultimately, it's your responsibility that everything looks exactly how you want it. 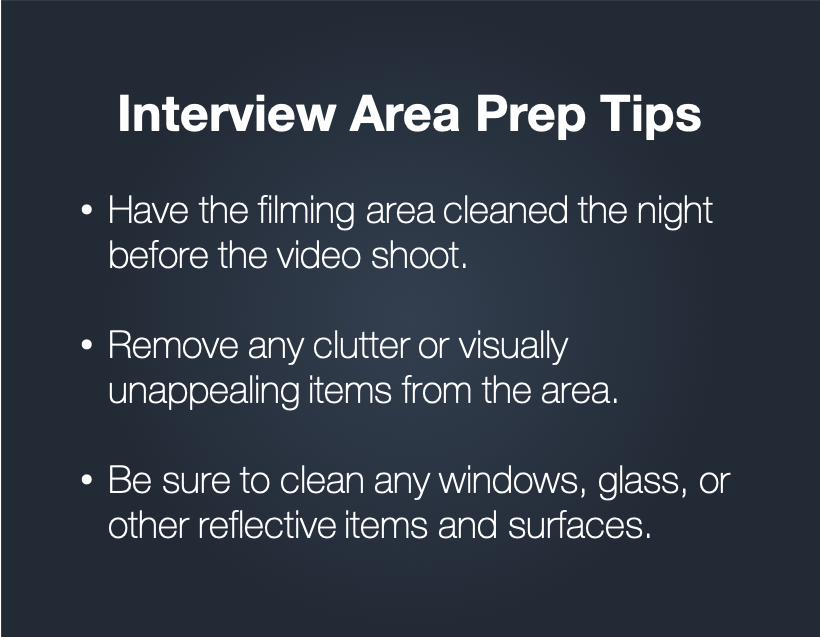 Occasionally, minor details can be overlooked that you or the producer may not notice until the person editing your video begins editing the footage in post-production. Professional video cameras with high-quality lenses have the ability to pick up even the most minor details, which is why you want to make sure the area you'll be filming in is as clean as possible, especially any glass or windows.

Also, be sure to remove any clutter or objects that may be distracting to viewers or visually unappealing. It's not uncommon to remove personal items from the background. And if an item looks off in the camera frame, don't hesitate to re-position it or remove it altogether, especially things that are casting unwanted shadows.

Unlike still photography, items captured in the video can't simply be "photoshopped" out. Well, they can, but in some cases, it might be cheaper just to re-shoot than to edit out something that shouldn't be there. If it's something static and nothing crosses its path in the frame, then it's probably not a big deal but still takes time to correct. However, if that's not the case, then it's a whole different story.

When it comes to producing fantastic testimonial videos, you can only depend so much on the video production company you hire to film and produce them. Just like any other marketing deliverable, whether it be a web design to a full Denver video production, the amount of effort you contribute will greatly affect the outcome of what is delivered. And when it comes to video, you as the content owner, have the ability to greatly influence the final outcome by preparing your on-screen talent ahead of the video shoot.

It's always best to share the questions with the people you'll be interviewing in advance as well as discuss clothing options and set time commitment expectations. You'll also want to proactively prepare the filming area and notify your fellow employees of when the video shoot is scheduled, and wherein the office it will be filmed. Following these simple best practices will help ensure that the testimonials you capture are the best they can possibly be.